One type of condom, that’s good for her pleasure – and not only – is the ribbed condom. Ribbed condoms are the ones that have lines spiraling up the condom, mostly referred to as bumps.

The bumps can be placed on the mid and upper side of the condom, but there are some that have them at the bottom so that they would increase clitoral stimulation as well. Using a ribbed condom means more pleasure for your woman – and if you don’t really care that much about her pleasure, well you should! Her pleasure means your pleasure, therefore treat her right.

Even more, ribbed condoms can come in multiple designs, so you can choose what you think it’s best for your partner. Deep ribs are one thing, and then they can be ribbed and contoured as well. It’s a whole world, and you have to discover it, after all.

The Pros and the Cons

Since you’ve already been introduced to ribbed condoms, and to how they are different when compared to standard ones, we’ll move on to the pros and cons of using this type of condoms.

As you probably already figured, the bumpy spiraling lines on the condom are strategically placed to increase pleasure and sexual sensation. This leads to extra friction, which results in more pleasure, both to the penis and the vaginal wall – so it’s a win-win situation.

So, the pro is the fact that ribbed condoms have the right lines in the right place, and you can be sure that she will feel them, and so will you.

On the other hand, there are some things you should consider before using a ribbed condom. Because of the lines on the condom, a female partner with sensitive or irritated skin will feel anything but pleasure if you decide to use one of these. Therefore, you should talk with your partner before trying this type of condoms, to make sure that you’ll end up increasing the pleasure, and not wipe it all away.

As always, remember to use lubricants, and to be generous with them, as they help a lot – especially in the case of ribbed condoms, which are usually thicker and require a little help to do the deed.

As previously mentioned, when using a ribbed condom, you should also use lubricants and if you were already using them with your standards condoms, be sure to pour a little more. Because of the ribs on the condom, it gets easier for it to accidentally fall off, something no one wants. So, you should add lube until you feel like you are using your regular condom and you’ll be good to go.

Secondly, very important is to make sure that the condom doesn’t hurt you or your partner. Not only do they have bumps but are also thicker than regular condoms, so a different level of pressure will be put on the vaginal wall, which is not always a good thing. Remember that ribbed condoms are intended for a little rough action, and if you or your partner is not into that, you should avoid using them.

Which Brands Are the Best?

When it comes to brands, we have the usual Trojan and Durex, and they seem to control the entire market of ribbed condoms, but we will also see some other manufacturers.

Besides Trojan and Durex, we have contender condoms from Kimono, Impulse, ONE, and Lifestyles. Almost all of them have different or unique rib patterns, and some of them are ribbed even on the inside, for the maximum pleasure of both partners.

We’ve given you some hints on which brands could provide you with the best ribbed condom, but we think it’s time we jump right into the guide, so you find out which ones you should look for exactly.

Therefore, in the following paragraphs, we’ll take a look at seven of the best ribbed condoms and compare them in terms of efficiency, pleasure, price, and quality and help you make a decision – to buy them or to ditch them!

As previously said, there are not many brands that have ribbed condoms in their collection. But this is not a bad thing. As competition increases, they eventually come up with new and diverse ways and looks for this type of condoms, so we could never get enough of them.

Be it Durex or Trojan, we have multiple products for you to choose from, so let’s dive in the world of ribbed condoms.

We’ll start our list with Trojan condoms. These ultra-ribbed condoms are made out of latex and have deep ribs along the entire condom. This feature makes them thicker than usual – but increases stimulation more.

As mentioned before, there’s the chance that these ribbed condoms could fall off accidentally. Well, Trojan apparently gave that thought some time and so, the Trojan Ultra Ribbed condoms come with a tapered base that results in a secure fit of the condom.

If you are a sensitive person or have a sensitive partner, these shouldn’t be on your list. Because of the deeper ribs, the condom is also thicker, and this will result in extra pressure on all of the areas involved in the act, even his.

Safety is, of course, and as always, assured. The condoms are tested multiple times in all the ways you could think of – so worry not!

Price-wise, the Trojan Ultra Ribbed condoms are on the affordable side, so you won’t have extra expenses because of your need for pleasure. 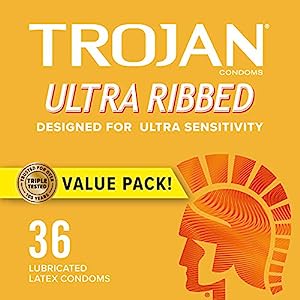 Another contender and another product from Trojan.

As it can be seen from the name, these condoms are specially designed for her pleasure. How come? It’s simple. Each condom is ribbed and contoured in a unique design – so there won’t be two of the same feeling. Stimulation, pleasure, will be different every time you put on a ribbed condom of this type.

Also, for her as well, a silky-smooth lubricant is present in these condoms, which will ensure sensitivity and comfort. Always remember that sensitivity is something to be taken care of when using a ribbed condom.

Because of the lubricant present, the risk of these condoms falling off is lower, and that’s a plus on our list when tracking down the best ribbed condoms.

When it comes to pricing, as with almost any Trojan product, the Her Pleasure Sensations condoms are affordable, almost close to being cheap. 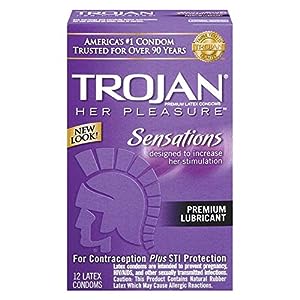 The LifeStyles condoms are well-known for their quality and smoothness. They are made from the best quality, naturally-colored latex. Also, they are much more lubricated than most of the ribbed condoms, which is always a good thing.

Still, in order to avoid friction and greatly reduce the possibility of breaking, you should always have close to you a lubricant, just in case you’re missing some.

Unlike most ribbed condoms, which still keep a feeling of smoothness, the LifeStyles RIBBED Pleasure are really ribbed. With ribs from the bottom of the condom to the top, each of them being different, you will achieve various levels of stimulation – so be careful to take it slow as your partner might experience pain if it’s happening too fast.

One more plus to the chart is the fact that the LifeStyles Ribbed have almost no smell at all – so you can say goodbye to the latex odor if you plan on using these.

4. Do {Each Other} Good Ribbed Condoms

The L. brand, which is not so popular, comes with impressive ratings. First of all, they come with a long lasting and very moist lubricant – thus there have been no complaints of the condom accidentally falling off.

Then, as we have mentioned earlier, this is one of the condoms that has a ribbed base, for clitoral stimulation. So, this is definitely one condom that makes sure to stimulate all important parts of the body.

Even more, because it is made using purified natural latex (it is 100% Glycerin, Paraben, and N9 free), some people that are allergic to latex have claimed they did not have any problems when using the L. Ribbed condoms.

Price-wise, let’s say that they are a bit more expensive than the usual ribbed condoms – but, as we’ve seen, they are worth the money. Well lubricated, ribbed base and extra safety, these are just the things you need.

The first thing to notice at these condoms is the fact that the ribbing goes not only towards the tip of the condom, but also to the open end. This way, both of you will feel increased pleasure as this condom will stimulate both of your sensitive areas at the same time.

Furthermore, the spiraling ribs on this Magnum aren’t as linear as they’re on most of the condoms out there – some of which have just ribs, which are not spiraled. These spiraling ribs are strategically placed to fill in certain spaces rather than push against them, in order to stimulate each and every part that matters.

As a downside, with every Magnum condom comes a strong latex scent that will turn out to be not that romantic – you’ll have to figure out what to do with the scent; maybe scented candles or… scented lubricant! Yea, we’d go with the lubricant, you can’t go wrong with that when handling ribbed condoms.

The Trojan Magnum Ribbed condoms are a little bit more expensive than other ribbed Trojan condoms, but they come with an increase in size and with spiraling ribs all across the condom.

The Trojan Ecstasy condoms seem to have them all. They come with Trojans UltraSmooth Premium Lubricant – inside and out – deep ribs at the top as well as on the bottom and a tapered base.

They have the lubricant, so there’s no chance of them falling off. On top of that, it’s both inside and outside the condom, for her pleasure as well as yours. The ribs are all over the condom, and they are deep as well – so you won’t fear to miss any sensitive and special spots.

And to end it all, there’s the tapered base that adds yet another level of safety from falling to these condoms, so you can just go on until you’re finished.

The Trojan Ultra Ribbed Ecstasy are affordable condoms with a price very similar to other ribbed condoms made by Trojan. 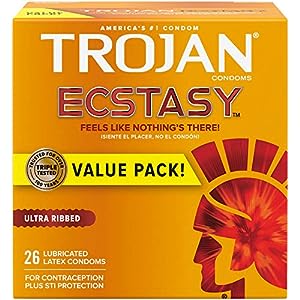 Of course, we can’t have a list of condoms without having Durex somewhere on it. Even if they don’t have plenty of ribbed condoms, they do offer quite a lot with their Performax Intense.

Besides being ribbed, they also have dots – which means more pleasure for both of you. It also comes with delay lubricant, also known as heat activated climax control lubricant, which is sure to make him last longer in bed.

One thing to keep in mind if you decide to choose Performax Intense is that you will definitely need some lube for this one as the lube it comes with is quite short lived and you don’t want any problems because of that.

The cherry on the cake, as with most Durex condoms, is the smell – which is just as pleasant as you’d want it to be. Little to no latex odor – this is always a good thing. 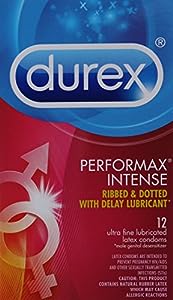 Ribbed condoms come in different shapes and sizes, but they also come with a variety of ribs – spiraled or not – that help increase the stimulation and pleasure of certain orifices.

If ribbed condoms are your thing or something you want to try, we hope our little guide here helped you have a better idea on which one to choose – and whether you should buy lubricant or not; yes, you should.

Talk with your partner before using ribbed condoms as problems may arise if one of you is too sensitive or just not into this type of condoms.