Contrary to the popular belief, the “one size fits all” approach doesn’t work with condoms. Their stretchy nature allows them to fit most men, but that’s not nearly enough to achieve the desired level of protection and comfort. In the following, you will learn how to correctly measure your penis length and girth so that you can use the numbers to find your perfect size condom. 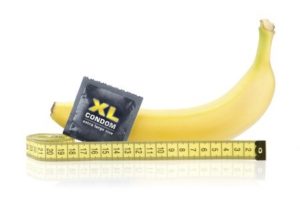 How to Measure Penis Length and Girth?

The penis can be measured in several different ways; however, there’s only one that can be considered as the standard. You will need a straight ruler, string or measuring tape, and something you can use to write down the information with.

To measure the circumference of the penis, wrap either a string or a measuring tape around the thickest part of the shaft. Do this while fully erect, and avoid tightening the measuring device too much. 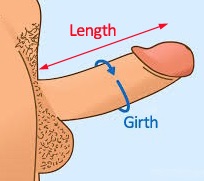 Are you really that big as you think? A research team from King’s College London has examined the penis size of more than 15,000 men, and discovered that the mean length of an erect human penis is approximately 5.2″ in length and 4.6″ in circumference.

The most endowed men come from the Democratic Republic of the Congo, where the average length is 7.1″. Men from the U.S. and the U.K. average at 5.1″ and 5.5″ respectively.

When selecting the right condom, the one measurement that makes all the difference is called nominal width. It is a termed used in the industry which is the measurement of the width (diameter) at the base or ring of the condom when it’s laid flat. Most condoms from world’s most popular condom manufacturers, such as Durex, measure around 56mm. If regular condoms feel too lose, it’s best to switch to a narrower brand. For example, the Durex Ultra Thin Feel has a nominal width of 52mm, making it much more secure. Brands like My Size even offer condoms that measure just 49 or 47mm.

There’s one additional measurement that can have much greater impact on how the condom feels and function than length and width: thickness. A regular condom has a thickness of around 0.07mm. For comparison, a single human hair has the average thickness of 0.1mm. Some manufacturers offer ultra-thin condoms, which provide much more intimate feeling during sex. These condoms often measure just 0.05mm, and some even go much lower than that. The Japanese condom manufacturer Sagami produces polyurethane contraceptives at just 0.01mm, making them the thinnest condoms in the world.

With all this in mind, the simplest strategy on how to select the right condom is to start with the regular size and see how it fits. Most men should find it satisfactory and those who don’t can easily buy a larger or a smaller condom